From Martin Danielson: We came to Stanton in 1977 and our children went to Willowbrook school. We met lots of parents who attended that school, along with Gill Woodford. Children grow up, develop, and move away.

Last year I went to a funeral of a good friend of mine and, who should come up to me at the crematorium but Gill. I hadn’t seen her in 30 years. Talk between us led to me giving her "Stanton on the Wolds - A brief history of the village". It was only then that she revealed her background. I said that she should write it down for posterity. This is the result...

I was born in 1946 and lived at 51 Stanton Lane with my parents Rene and Dick Ashton. (This is the bungalow which now has the lovely tree owl sculptures) I have some fond memories of my childhood and would like to share them with you.

My parents were both in the RAF and met during the war, before marrying in 1945. They had their bungalow at Stanton built by Gilbert and Hall and, my father's sister Betty Cartwright and husband Jim lived next door at number 53, together with their sons, my cousins Terry, Dennis and Michael Cartwright. They had previously lived at the Old Rectory on Browns Lane, seen in the photo below. 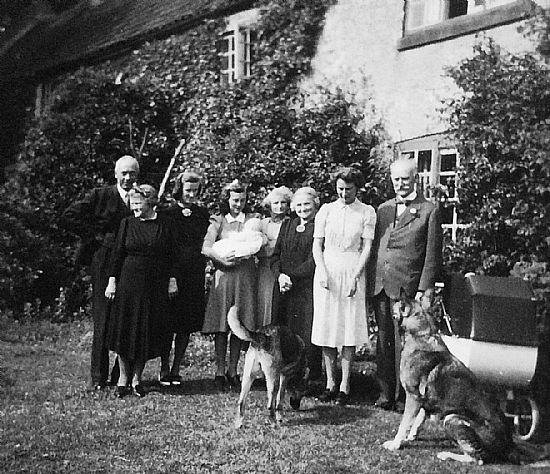 Cousin Terry is the baby with his mother Betty and my grandparents Dickie and Evelyn Ashton are on the left. This photo was taken approximately 80 years ago.

My father and Jim Cartwright ran the family Ashton Farm Nursery on Nicker Hill, the main entrance to which was where The Heathers now stands, although there was also a farm gated entrance to the field at the end of Private Road, off Nicker Hill. Ten acres of this farmland was sold to Wimpey but another two acres of the nursery land remained in the family, to be sold years later to Foreman and Linneker. This is where the Meadow Drive bungalows are now and my cousin Michael lives there, having built his bungalow at number 2, not seen from the road.

My grandparents lived at Wolds Edge, Nicker Hill, occupied later by my parents, and later still by my husband and me. I've fond memories of the farm, all the cows had names and the milk was cooled before being collected by Bradshaws to put with their milk and taken off for bottling. We liaised with farmer George Holbrook opposite when it came to harvesting time and hired combine harvesters sharing the cost between us. Our field was ideal for sledging in winter as it went down towards where the Wolds Drive shops now are.

Life on Stanton Lane was very happy and carefree. When I first went to school, at Mrs Wayman's, Tollerton Lane, Tollerton, Mum helped out at Stanwolds Kennels, with Jean Wallis and sister Pat Guyler and I would go after school and play with the dogs. I remember one 'resident' a great St Bernard dog called Prince. Mum later became a GPO trained 'Number Please' telephonist at the manual Plumtree Telephone Exchange which occupied part of the house on the corner of Rose Grove, Keyworth. When she first started work there, many people had party lines so great care was taken! 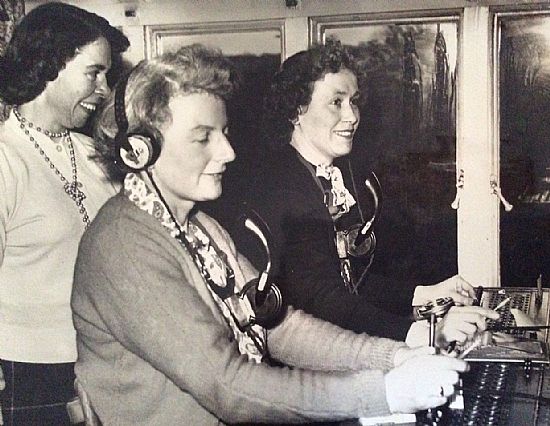 When the Exchange later became automated, Mum was asked to be the receptionist for Doctor Russell, first based at his house on Bunny Lane, which Amanda Findley Opticians now occupies, but later at the old health centre where the present car park now stands. Dr Russell was joined by Dr Stevenson from Tollerton and later Dr Annesley and later still Dr Jenkinson. My father Dick Ashton was a Stanton Parish Councillor for many years and loved the outdoors, walking, sailing and motor caravanning. Many will remember him walking his German Shepherd dogs. He was a co-founder member of the Nottingham Sailing Club, near Holme Pierrepont, along with Charlie Wright.

My childhood meant playing with my cousins, climbing trees, going down to the railway track to watch the trains go by or playing on the farm.  My friend, another Gill, and her sister Wendy Turner lived at number 59 with their parents Joan and Eric. They kept geese in their back garden. Next door to us on our right lived Mr Bagguley and, at number 47, was the Reverend Major Smith who was Stanton's own dedicated vicar. He was a widower but later remarried. Next door to him Sheila and Michael Ferrar lived and (and Sheila still does) - beyond them and the footpath there was space, the 'new' houses had yet to be built. The Beecrofts house was next, almost opposite the next footpath which goes around the golf course to the church.

My friend Richard Ireson lived on Selby Lane with his parents Cath and Harry. Richard would call for me on Sunday morning to go to Sunday School. Our Sunday School teacher was Dolly Bryans and we were all given a lovely little book called 'We see Jesus'. This obviously influenced our childhood as Richard later became a vicar in Lincolnshire.

My grandfather bought the organ and the aisle carpet for Stanton and Keyworth churches (I don't know which was which) but he was a very quiet unassuming man so nobody knew this. After his death, my grandmother found the correspondence and receipts, even she didn't know. To get to church Richard and I would either walk down the public footpath on the left, and round the golf course or what seemed like the long way round. If we did the latter, we would pass the Beecroft's house on the right and call in to the little 'shop' beyond to buy sweets which were kept in a corner cupboard. Next door to this lived Barbara Walker, who had a pony called Dusty which she would let me ride sometimes. At the back of her house, set back, lived my friend Richard Ireson's aunt, they bred Wire Haired Fox Terriers as I recall. Before the bend onto Browns Lane lived Mr Palfrey, then round the corner Shirley and Pamela Bryans and their parents.

In 1965 I married a local 'lad' from Keyworth, Robert Woodford. My late father-in-law Harold Woodford is the young boy mentioned in your book as living at Glebe Cottage on Browns Lane with his parents. It is ironic that my aunt and uncle lived at the Old Rectory and my father-in-law lived at Glebe Cottage, but at different times so didn't know each other.

My husband and I had The Heathers on Nicker Hill built by Scattergood and Oldham in 1967/8, before moving next door many years later to my grandparents' old home Wolds Edge. We downsized from there 6 years ago to High View Avenue. We haven't moved far have we in 70 odd years!