Joseph Hatherley and Phoebe Hodgett were married at All Saints Parish Church Stanton-on-the-Wolds on the 3rd September 1879. They lived in a thatched cottage on Thurlby Lane at the Stanton Lane end and had fourteen children, six boys [Footnote 1] and eight girls [Footnote 2].

The family experienced several sad losses of their children including a daughter Ruth who died in February 1891 aged just 6 weeks. They lost another daughter, Mary Elizabeth, who was aged 18 when she died in December 1912.

The War Memorial in Stanton churchyard records that the family lost two sons in the first World War. Leonard aged 18 died in No 6 Clearing Hospital, Mervill, France in February 1915 and Joseph aged 29 was killed at the Somme, France in March 1918. Joseph’s twin brother Isaac lost both his legs in the war. A fourth brother, Fred also served.

The register of burials at All Saints church, Stanton also records the interment of Samuel Hatherley, aged 18, on the 26th January 1902.

Samuel had left home and was lodging in Park Street, Alfreton having got a job as a coal miner at the Swanwick New Colliery [Footnote 3].

Albert Maycock had been working with another miner, John Severn, in the return airway of the Deep Pit at Swanwick on Wednesday the 22nd of January 1902. The mine deputy, Henry Brentnall who was inspecting the airway was told by John Severn that the quality of the air coming up from the old workings was not as good as usual; Albert Maycock and John Severn both had headaches. The deputy altered the brattice cloth [Footnote 4] to let in more air and the three men all came out together.

The next day, Albert Maycock was still unwell and so Samuel Hatherley took his place at work. The deputy checked the quality of the air in the return airway early in morning and left at 7am. Samuel and John Severn started work at 6.30am repairing the airway. Later in the morning the deputy entered the return airway where the two miners had been working and noticed the air had a sweet smell. He continued on for about 40 yards and saw the two men lying face down. He thought they were asleep but in fact they were both dead when he found them at 10.55am.

By Friday the 24th January many local and some national newspapers carried the headline "The suffocated Swanwick miners". An inquest into the deaths was opened by Mr C.G. Busby J.P. District Coroner on the Friday afternoon at the Steam Packet Inn in Swanwick. After formal identification of the two men the inquest was adjourned to the following Thursday.

When the inquest was re-opened at the Queen’s Head Inn at Alfreton, a very detailed investigation  lasted five hours. The jurors took 20 minutes to agree that the two men lost their lives from "Sweet damp" [Footnote 5] or poisoning by carbon monoxide gas emanating from the old workings as they had been working in an extremely narrow passageway measuring 2 feet by 3 feet by 90 yards long. The management were censured for failing to keep records of the checks on the air quality. 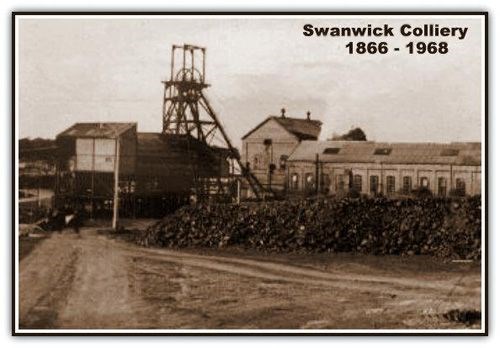 Swanwick colliery was located to the south of Alfreton, north east of Swanwick village and north west of Somercotes. It was sunk in 1866 and it closed in September 1968 after 102 years. It eventually had six shafts, sunk in the following order:

Over 80 men died as the result of accidents at the colliery. 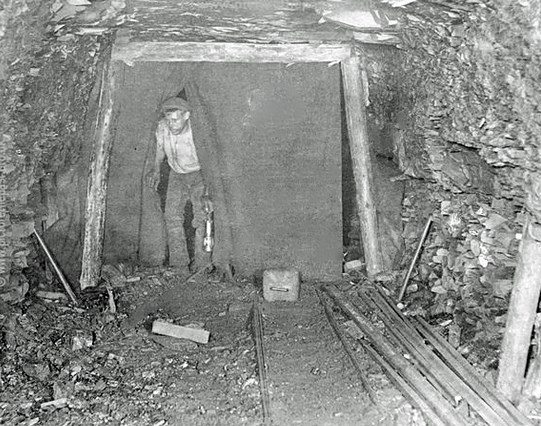 A brattice is a partition used in mining. It is built between columns of a sub-surface mine to direct air for ventilation. Depending on the type of mine and how the operation is run, brattices can be permanent (concrete or wood) or temporary (cloth). Temporary installations are also called curtains.

Click on the image to see a larger version.

Sweet damp, also called white damp, is the name used in mines to refer to carbon monoxide gas. The gas is without colour, odour or taste. A headache is a typical sympotom of carbon monoxide poisoning.

Stanton on the Wolds Parish Council would like to thank Alan and Val Hunt of Melton Road for their original article and research on which this page is based.